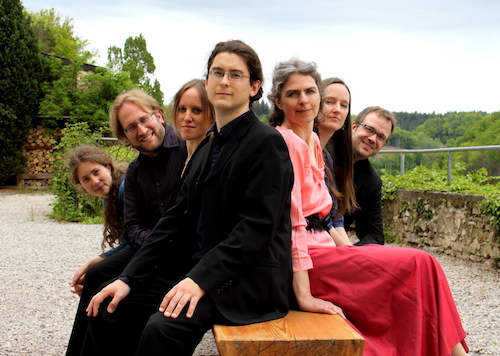 Le Miroir de Musique is an ensemble specialised in the music of the late Middle Ages and Renaissance, from the golden age of the troubadours to the humanist movements of the 16th century. Directed by Baptiste Romain (medieval fiddles, Renaissance violin, bagpipes) the ensemble is based in Basel (CH) and brings together the most prolific of the new generation of early music performers, many of whom are graduates of the Schola Cantorum Basiliensis. Le Miroir de Musique combines historically informed performance with rich sonorities and virtuosic instrumental practice.
The image of a "Mirror of Music" is borrowed from Jacques de Liège's treatise (Speculum Musicae), and reflects our goal of painting a vivid picture of medieval and Renaissance music, in a spirit of fidelity to the original sources.

After the success of the first CD of the ensemble, The Birth of the Violin: the first violins and their repertoire (1500-1550), in 2013, the second CD Sulla Lira: The voice of Orpheus: the art of recitation – lira da braccio - lirone was released in 2015, the third one, Arnold & Hugo De Lantins: Secular Works; Franco-Italian love songs from the early 15th century, came out in 2016, and the most recent one, Johannis Tinctoris: Secret Consolations in 2017.

In this ensemble there are musicians performing, who are busy with this particular repertoire for years and even decades and have developed an enormous expertise for it. This is especially essential for Medieval and Renaissance music, as plenty of pieces of those times only were handed down to us in fragments, sometimes even only with their texts, because the melodies were not noted. So it's very often about complementing parts (in a stilistically suitable way) and melodies, improvising and even composing. This demands a lot of experience and expert knowledge, and last but not least highest motivation to do research for sources and excavate fascinating music.

All these qualities characterise the singers and instrumentalists of Le Miroir de Musique - above all director Baptiste Romain -, in combination with refreshing commitment to their playing, thrilling stage presence and great passion for what they do. Thus they succeed effortlessly in also enthusing listeners for their repertoire, who prior to that were of the opinion not to be interested in any music before Bach!