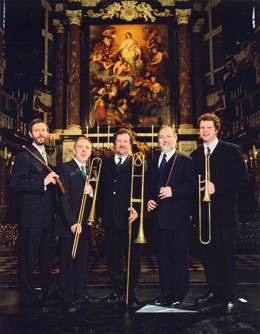 For three decades, Concerto Palatino, under the direction of Bruce Dickey and Charles Toet, has been leading the way in the revival of the cornetto and baroque trombone. Their highly acclaimed concerts and recordings have brought an appreciation of their important but little known music to modern audiences, and stimulated many young players to take up these instruments, practically unknown a generation ago.

Concerto Palatino takes its name from a historical ensemble of cornettists and trombonists which existed in the city of Bologna for over 200 years under the name Il concerto palatino della Signoria di Bologna. Following in the footsteps of these former virtuosi, their aim is to restore these instruments to an active and respected place in concert life, and to cultivate a love of their music among audiences and players alike.

The names Bruce Dickey and Charles Toet are practically synonymous with the modern revival of the cornetto and the Baroque trombone and are largely responsible for the enormous advances that have been made in the last 20 years in playing standards on these instruments. In a collaboration of some 30 years, they have together trained a whole generation of cornetto and trombone players, many of whom have become regular members of Concerto Palatino.

While the core group is comprised of two cornetti and three trombones, this formation is frequently augmented by the addition of brass players, strings, or singers as necessary. Inevitably, much of their repertoire is sacred, as these instruments were a fixture of musical chapels in both the Catholic south and the Protestant north, from the time of the first flowering of Flemish polyphony in the early 16th century through their twilight years at the time of J.S. Bach, one of the last composers to employ them in a serious way.

Concerto Palatino frequently collaborates with other leading ensembles, in particular Cantus Cölln (Konrad Junghänel), Collegium Vocale Ghent (Philippe Herreweghe), Tragicomedia (Steven Stubbs and Erin Headley), the Amsterdam Baroque Orchestra (Ton Koopman), and the Bach Collegium Japan (Masaki Suzuki), but the members are also asked to join other well-known ensembles, even orchestras of opera-houses all over the world for productions of the operas of Claudio Monteverdi and other composers. So Concerto Palatino was enthousiastically welcomed on most of the prestigious festivals and stages all over the world.

Concerto Palatino places a high priority on unearthing neglected gems of music history and giving them a place in the concert hall and record catalogs alongside the works of established masters. Thus, in addition to highly acclaimed recordings of Schütz, Gabrieli, and Monteverdi, they have made premiere recordings of the Marian Vespers of Francesco Cavalli, the Missa Maria Concertata of Christoph Strauss, and Palestrina’s Missa sine nomine preserved in a manuscript of J. S. Bach. Their numerous recordings for EMI Reflexe, Accent, and harmonia mundi France have received high acclaim. In particular, a major series of recordings together with Cantus Cölln (Vespers of Monteverdi and Rosenmüller, Schütz’ Psalmen Davids and Symphoniae sacrae, the Selva Morale e spirituale by Monteverdi) has won numerous prestigious awards.